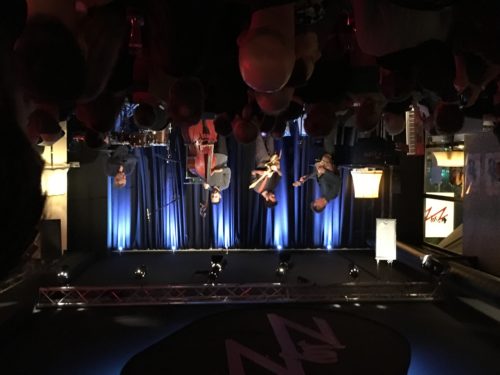 As soon as the musicians were on stage, several cell phones went on in the audience. Guitars were googled. I like the idea of ​​people buying an instrument or hoarding their knowledge about them because someone else is playing well. I’m  very open towards other mechanisms of virtual and symbolic appropriation.

Cline (who has a twin brother playing the drums) had the mic, but did not say anything, just started to play, after a glance at the fully booked hall. And then, after a few seconds, the guitarists drifted out of my focus, and my attention shifted to the drummer. He was so good, he took a lot more space than just a rhythm line, a rich and thoughtful space. You may know this brief sense of correctness and realisation when switching from 2D to three-dimensional on Google Earth, from rectangles to houses, from spots to trees, or from mountains to the world. As if it were an evening with Tom Rainey and band. So that’s what it really sounds like to play the drums.

I do not know if this is just the way things are done  these days anyway, but after this first piece I was awake and attentive again.

(The first concert of the evening were two very very free jazzmen, the Kropinski-Heupel duo, one on transverse flute and even bass flute, playing something like scrambled scales, breathless, without beginning or end or any other hommage to my ears. I listen to it and think “ah, interesting” and find no access, but I do not know if there is any access at all, or just l’art pour l’art. On the other hand: A guy from the audience told me about a concert he attendet while beeing with the military in the GDR, and how free jazz saved his soul, that is, of course, an excellent argument.)

The music and the tracks (as content and form) were mostly from Cline, and there was everything in them, they are highly complex systems,  all have an end (I do not like finishing on a jinglejangle, nor with a fadeout), are mini-worlds. Swing ghost ’59 is really great, even though I do not understand what I’m hearing, just that it has it all. And it is beautiful and funny. It is exiting to listen to highly different pieces of musical structure, known and unknown, coming together into a work of art, or rather interlocking them like magic, as if Cline had started on something divine, would have retro-engineered it, and that’s what came out of it. (I am a bit hypoglicemic)

This time Julian Lage for my taste was not central enough, he had some fun and played a lot, but today it was about a band, it was a concert evening, with the songs more center stage than the heroes. No dialogue between guitars like in Milan, all of these four outstanding musicians were on an equal footing. The bassist was Jorge Roeder, a different guy  than the one on the CD. Maybe this tour is the other side of the coin Cline / Lage, first a tour with more Lage, then one with more band? They also had a few free or avant-garde jazz solos, even one from the drummer, all played with heart and soul and the whole man behind it, even with a certain sexiness. The enrapture during the solos has, like the solo itself, some elements of show, but the main energy was the mere happines to be able to make music, constantly, every day, with people who are better than you. Everyone is better between these, its like you always tell all of your children that you love them most. I can listen to those solos when I can see and feel that impulse, only live in concert, otherwise it is too closed up for my hearing, if you take recognizable harmonies or melodies as an opening.

The show was actually too short, 80-90 minutes, there was a very quiet encore, Cline said thank you, bowed, and “nice that you came”. 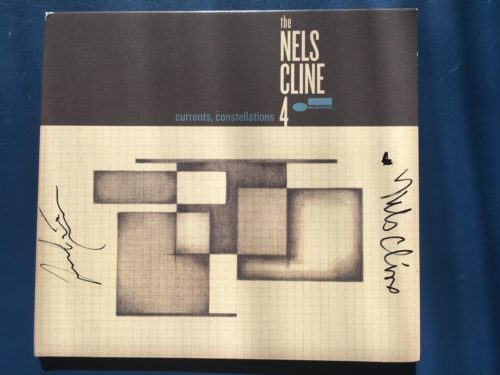 The club has room for maybe 200 people, the way to the bathroom leads right past the stage, and passing by I looked for and got some eye contact, I love that about small locations. The guys with the phones went to the stage as soon as the musicians left, to take pictures of amplifiers and pedals. At the end of the evening, the room was almost empty, Cline and Lage were clearing away  their cable stuff, and I took my chance to ask them to sign my CD. Few people do that, is signing only common with books? I’ll have everything signed that’s not on the tree at three, it changes my sentiment and closeness to art and artists, and you get a smile. It works like an additional anchor.

I had spent my last cash for the CD, and did not wait to see if the musicians show up again. I don’t have music related questions, and the other ones are hard to answer anyway. Where does the magic come from, whether they had to sacrifice something, if everything in them is music, and how to find the end of a piece, more with the heart or the head? This is of course nonsense, because in this class of brilliance your talent is just one part, with intelligence, perception, the openness of the soul. Who wants to unravel all that?